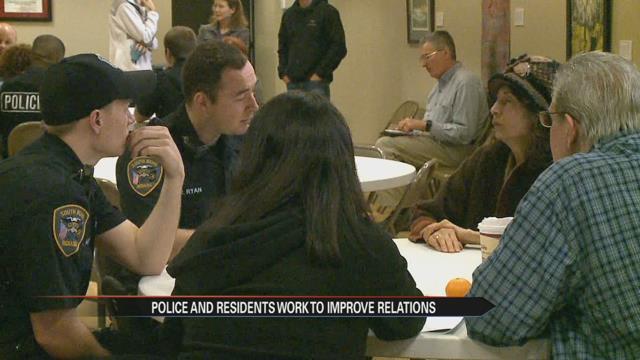 “This is exactly what community policing is all about,” South Bend Councilman Tim Scott said.

Scott helped organize an event at the Near Northwest Neighborhood community center on Portage Avenue that brought residents and police officers together to talk.

“I think it went well,” South Bend resident Komaneach Wheeler said. “A lot of people are really out here seeking what can they do about this?”

A number of recent shootings has this community on edge, so Scott helped organize the meeting to help residents communicate with officers.

“This is how it starts,” Scott said. “You meet with people. You meet with the officers. And you understand…their perspectives.”

A question and answer forum took place for more than an hour and officers had a chance to connect with citizens in a rare way.

Bourn said the meeting allowed him to interact with residents in a relaxed setting.

“And actually meet a person rather than just service the call, so we get the chance to know the community,” Bourn said.

Scott said meeting turnouts like Sunday’s show his community cares about their neighborhood.

“They come together and they seek out the facts to get solutions,” Scott said. “And that’s what I love about living here.”

“It means a lot to me,” Wheeler said.”More than I even realized before coming here.”

Scott said he’s hoping to schedule more meetings like this to keep a dialogue between citizens and police going.