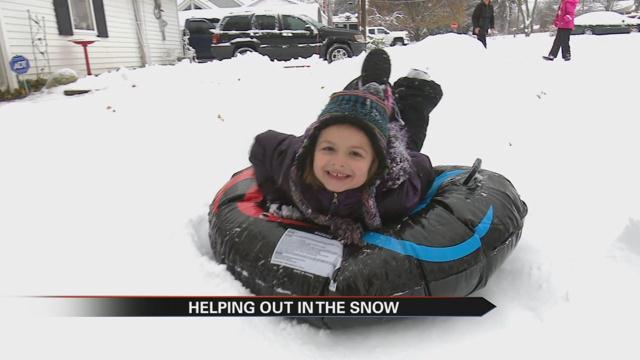 As the snow continues to fall in South Bend, some residents are bracing themselves for another season of slick roads, while others are just enjoying the winter wonderland.

"I wasn't expecting it to come this early. i actually had a couple of these gifts wrapped under the tree, thinking that snow was going to come after Christmas, so we got to open a couple Christmas presents early to enjoy the snow," said Kelly Rock, who lives on Ponsha Street in South Bend.

Rock and her neighbors decided to embrace the snow and built their own sledding ramp in their front yard.

But not everyone in South Bend thinks snow is sweet.

"I hate the snow," said one neighbor, Mike Lenczewski.

Lenczewski was shoveling for two and a half hours during the lull in the snowfall Sunday.

He also plays watchdog from his front window, looking for any cars that may get stuck.

"[I'm] watching the cars as they slide by the stop signs, because you know they don't want to make a complete stop, because trying to get started again is almost impossible out here," said Lenczewski.

On the back roads, if cars aren't getting stuck, there's a good chance they're slipping.

"These roads are very slick. Even my driveway after being plowed is so slick it's hard to walk on," said Lenczewski.

"While snow just brings headaches for some, to others, it can only mean one thing.

"Cool, because now I know that it means Santa's going to be coming soon," said Veda's best friend, Amerelle Eisenhart.

For those out driving along the back roads, neighbors advise paying close attention to the corners, because they've seen many people's cars get stuck there throughout the day.