Spirited has been waiting over a month for a restock of the vegan-friendly products.

“At the end of March, we ran out and we were told that we would be getting more around May 16. Then May 16 came and went and we did not get more and no one had answers or dates or information on when or if we would ever be getting more,” said co-owner and general manager Brooke Donegan said on June 4.

According to Donegan, Spirited began offering dishes like the Impossible Burger and even making spaghetti using Impossible meatballs in October, just a few months after the cocktail bar opened. Spirited created Impossible Wednesdays, featuring a comfort food item that used the meatless product, like meatloaf, tacos and biscuits and gravy.

“We actually had a lot of people that came in just for the Impossible Burger,” Donegan said.

The restaurant unveiled its new menu on May 28, minus the items that used Impossible Food products. 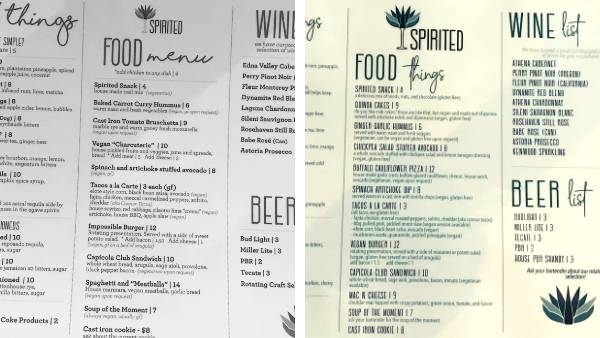 “We didn’t have it anymore and we didn’t have any answers about when we would get it so we ended up pushing up the date for our new menu so we could take those menu items off and find a consistent product,” Donegan said.

The change was met with confusion and disappointment from customers that Donegan said she did not have answers for, other than her order was not filled.

Until the product can be restocked regularly, Donegan says Spirited will have to leave the product off of the menu, though they are trying to find new solutions to meet the needs of vegan customers. Spirited has created their own meatless burger, but for now, Impossible Wednesdays and special meatless items are not available.

“It’s frustrating that we’ve been supporting it and had it on our menu and now we can’t get it,” Donegan said.

Impossible Foods has publicly shared information on the shortage, connecting the issue to Impossible Foods’ rapid growth and alluding to a necessary short-term supply chain revamp. The Impossible Burger is now sold in about 8,000 restaurants and is making its debut in national chains like Little Caesars, Qdoba and Burger King.

The company said in a statement that they are “scrambling to keep up with scorching demand.”

According to Impossible Foods, the company is working to rectify the situation by increasing the numbers of hours of operation and workforce at the plant in Oakland, California as well as adding more manufacturing capacity, among other solutions.

When asked about Spirited’s specific order, Impossible Foods said, “we sell directly to more than 400 distributors, and these distributors then sell the product directly to the restaurants. I can't provide a specific date when any particular restaurant will be able to receive more product from its distributor.”

Read the full statement from Impossible Foods on the product shortage in small restaurants across the nation.

Growth has come from every sales category where Impossible Foods does business -- independent restaurants, large restaurant chains such as White Castle, Qdoba and Red Robin, and non-commercial outlets such as theme parks, museums, stadiums and college campuses nationwide. Sales have increased 4X in Asia over the past three months alone.

We are scrambling to keep up with scorching demand. Impossible Foods is in the midst of increasing the number of hours of operation and headcount at the plant in Oakland, Calif. The plant now runs two 12-hours shifts per day and employs about 130 full-time employees (including 25 who started just last week). We are aggressively recruiting additional new hires to work in Oakland a variety of functions, including workers for a planned third shift.

Also, last month we a new senior executive with extensive manufacturing experience. Sheetal Shah has spent more than a decade scaling up tech companies to achieve breakthrough growth -- and we’re confident he’ll do the same for Impossible Foods. Also last month, we announced $300M in new investment from both blue-chip global investors and high-profile individuals. We’ll dedicate a significant amount of funding to increasing production quickly and to our long-term growth strategy.

To achieve continued breakout growth, the company will add more manufacturing capacity and is actively pursuing strategies for doing so. We are not providing additional details on our manufacturing expansion at this time. Stay tuned.

We are urging consumers to call restaurants in advance to ensure that they still have Impossible Burger in stock, and to inquire when new shipments are expected to arrive.

Impossible Foods has a supply chain that’s highly scalable, and the product is sourced from abundant ingredients. The company faces no insurmountable supply-chain constraints or fundamental bottlenecks; like many successful startups, we are facing short-term ramp-up challenges resulting from demand greatly outstripping supply.

Photos appearing in the video above courtesy of Spirited.