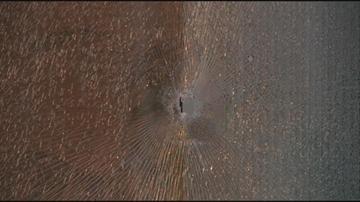 SOUTH BEND, Ind. – At least two suspects went on the run after a shooting at the River Park Apartments Northside Boulevard on Wednesday night.

Police were called to the scene just before 8:30 p.m. on a report of multiple shots fired in the back parking lot of the complex.  Witnesses said a man on foot had been arguing with someone in a car.  Then somebody started shooting sending multiple rounds into the air and into at least one apartment.  One resident narrowly avoided being hit by a bullet that smashed through her patio door.

Cops were surprised that a shooting took place in a usually quiet part of the city.

“This is a pretty quiet area so we don’t usually have shootings that happen over here or too much disturbance happening over here,” explained Lt. David Newton of the South Bend Police Department.  “It’s very quiet here, you know, there’s a lot of parts of the city that are just residential and quiet but things happen everywhere.”

By the time police arrived on scene the man on foot had fled to the south and the suspect or suspects in the vehicle drove away to the north.  As of late Wednesday night no suspects had been caught.

No bystanders were hit in the shooting, officers couldn’t determine whether any of the suspects had been wounded.