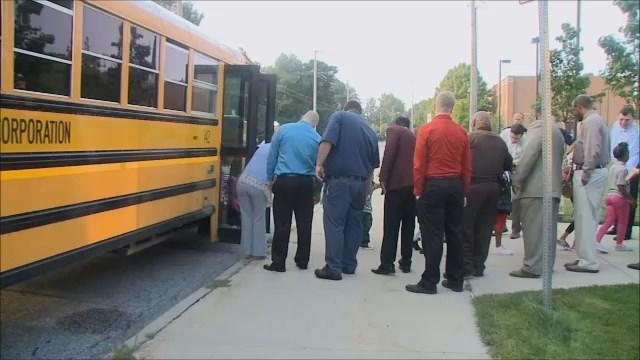 Some South Bend dads spent their morning welcoming students on their first day back to class.

Cheering and applause for students getting off the bus this morning.

“I wish when I went to work somebody was there giving me a high-five on the way in, so why wouldn’t a kid want that,” said Sam Centellas, Executive Director of La Casa de Amistad.

A group of dads gathered outside several different South Bend schools, one being Marquette Montessori, as part of a Fathers First initiative.

“I know summer was a long summer for them and so just to give them that excitement to say ‘go ahead and do what you need to do for school’,” said Damon Pittman, a Parent Engagement Manager for head start.

“Today was really about helping children know that number one, education is important and that there are men and people in the community that actually care about your success,” said LaChelle Barnett.

And the group got the reaction they were looking for.

“Just to see the kids’ faces… they were kinda surprised at first but then they got excited,” said Barnett.

And Fathers First doesn’t stop there. The next time these dads get together, they will be the ones who are celebrated.

“We’ll have a conference coming up in September to honor a lot of our fathers and to also have some resources and some information for fathers as well,” said Pittman.

Anyone is welcome to join fathers first and they're always looking for positive role models to attend their upcoming events.