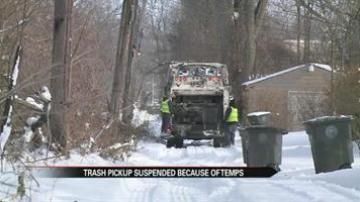 SOUTH BEND, Ind. -- The weather is going to be so cold next week, the city of South Bend will suspend garbage pickup on Monday and Tuesday for people who put their garbage cans in alleys. The city last suspended garbage collection two years ago.

The Manager of Operations for the Solid Waste Department, Andre Price, said a high of 6 below on Monday could be extremely dangerous for the guys on the back of the garbage truck.

"It's a physical job so we start to sweat after about an hour so when you put wet on top of somebody out in the elements for two of three hours straight when it's that cold, we start to worry about hypothermia," said Price.

Andrea Teeter and her alley collection crew said this has been a rough winter for them so far.

"We've seen a few guys get frost bite and have to get treated for it. It's just nearly impossible to stay warm out here when it's this cold," said Teeter.

Teeter says they have to pull over and let the workers warm up inside the truck.

"The guys need to take breaks while they are on the back. After about 10-15 minutes of bitter cold temperatures you can't feel your fingers. Your ears are cold even with a hat on," said Teeter.

That's why South Bend will only pick up waste that is collected with their automated truck.

"We're not going to suspend our automated collection which is our curbside program, still put it out if Monday and Tuesday is your regular day. But if you put it out in the alley, we ask you to not put it out until Wednesday," said Price.

Sanitation crews say it will help if you put your trash close to the alley line and curb so they don't have to drag the garbage can through the snow.