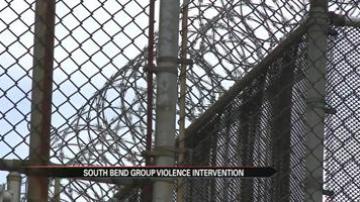 SOUTH BEND, Ind. -- Members of South Bend Group Violence Intervention held a "call-in" - face-to-face meeting, with local residents who have a past history of gang violence. The intervention is a new approach to combating violence.

Thursday night's call-in was for 28 people who have been charged or arrested for gang violence.

“We wanted to have a manageable number where they didn’t feel like they were being talked at. Because that’s not what we’re doing. We’re talking through them this evening,” said Detective Sergeant Dominic Zultanski with the South Bend Police Department.

The call-in had three main messages.

It wasn't just officers spreading the messages. Community members like Isaac Hunt, who was heavily involved in gang violence and served time for murder in the past, are also rising to this occasion.

Hunt has since turned his life around and now mentors people who are going through what he once did.

“Here I am. I’ve been in their situation. But I know I how to get out of it. I have the tools and the map to show you,” said Hunt. “This is one of the reasons why I'm involved in the work that I am. Mentoring young men. I’ve been doing this for a while. To give back because I have something to give because I understand where they're coming from.”

Sergeant Zultanski said the way they used to fight gang violence is not working anymore.

“We know as law enforcement, the way we’ve done business before is not the right way. We can’t simply go out, put a bunch of names on a board and arrest everyone. We have to hold people accountable,” says Zultanksi.

Zultanski also said, this is just the beginning of the initiative. For more information on the violence intervention, click here.