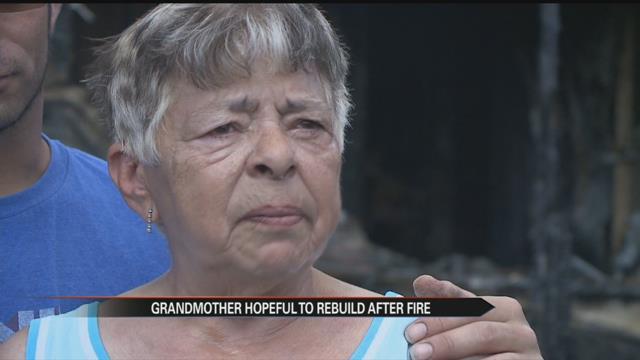 A 72-year-old South Bend woman is homeless after the house she built with her husband burned down a second time.

Betty Smith’s home was destroyed by a fire early Saturday morning, the cause of which is still unknown.

“I’ve always had my own home,” Betty said.

Now all she has is ash and rubble.

Betty’s insurance covers only the mortgage, which means she has nothing to replace what was inside.

It’s the things money can’t buy she misses most, like a ring her late husband made her.

“He made me a ring. It was a heart that I’ve had for years, and I don’t have that anymore,” Betty said.

This feeling is nothing new for Betty.

“I remember coming home, getting off the bus and seeing all the fire trucks at the house. Instantly I started crying,” Bruno said.

Betty rebuilt the house in the early 1990’s with her husband from the ground up.

It was a favorite spot for her dozens of grandchildren.

“We always had kids coming in and out of the house all the time,” Betty said.

Now she’s asking for help to get it back.

Betty’s family started a Go Fund Me page for donations, but they say any help from volunteering, to even a hug will make a difference.

They say in a perfect world, they would rebuild their home once again in this same spot.