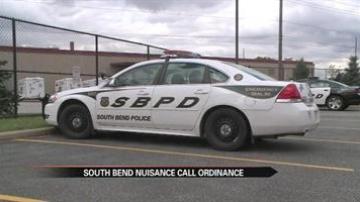 SOUTH BEND, Ind. -- The new nuisance ordinance is in effect in South Bend. It fines homeowners and business owners who call 9-1-1 more than five times in 60 days. The bill's sponsor says he has received positive feedback from homeowners and police, but business owners are concerned they'll be fined when they call to ask for help.

"We don't have no problem over here," said Jose Diego of Palacio Tropical.

Diego doesn't want to be guilty by association. His bar is located right next to Johnny Mac's.

J Mac's bar is no stranger to police. Over the years, a number of fights and shootings have taken place near it.

"Next door, we have a little bit of a problem - every weekend. But I don't know what's going on," said Diego.

Diego says his business has suffered because of it. He's heard about the new ordinance regarding problem properties, but fears a fight could spill over from next door and he'd be penalized.

Scott says that's not the case.

While it is possible for some businesses to fall victim, a store calling multiple times over shoplifting isn't likely to be fined by police.

"They go out and do an investigation and make sure the information is accurate - make sure the calls for service are correct," said Scott.

For places that can afford the $250 fine, Scott says the city, police and prosecutor's office can take other steps.

"They all have their ability and power to go above and beyond chronic nuisance," said  Scott.

Which is good because Diego says he shouldn't have to suffer from the actions of others.

"The city got to do something. Something, because this is a nice area and nice people live over here," said Diego.

We tried calling the police multiple times this week to see if those service calls had dropped and, if so, by how much.

We're still waiting to hear back.