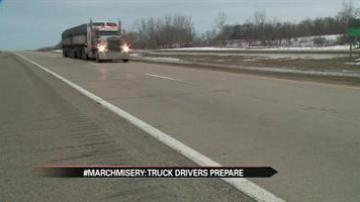 BERRIEN COUNTY, Mich. -- The road with some of the worst weather-related crashes this winter is I-94 that runs through LaPorte, Berrien, and Van Buren counties.  Representatives from MDOT say this next storm, with the rain followed by sleet and followed by snow, will only make for more slick and dangerous road conditions.

MDOT says this year they have been a lot more proactive in how they deal with their winter operations.

At any given time during a storm, they have 90 plow trucks out on the roads throughout their nine southwestern counties.

"This is just business as usual for us. Our operators know the weather is coming, they know how to behave in it, and they know what to do with all that snow," says Nick Schirripa, the spokesman for MDOT's southwest region.

Others that say they also know how to behave in this type of weather, are truck drivers.

Throughout the season, there have been several multi-car pileups throughout Michiana, and many have happened on I-94, all because of extreme winter weather.

"Usually I just pull off if it gets too bad, but tonight I'll increase my following distance and slow it down a bit, just as long as it doesn't ice up," says Jamie Johnson, a truck driver based out of Illinois.