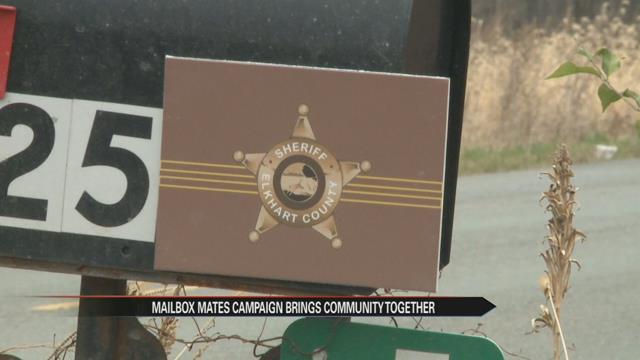 An Elkhart County man hopes to inspire change in the community through mailbox signs.

Michael Andrews is the founder of Mailbox Mates. It is basically a mini-billboard for mailboxes. This past Monday, he started a new Mailbox Mates campaign to give back to the community.

Andrews has titled it the "In God We Trust" campaign because that is displayed along with an American flag on the sign.

The money raised from this will go to benefit SPA Ministries in Elkhart. They help women who have been through issues like divorce, domestic violence, and substance abuse.

“I would like to see it go at least until February when they have their dinner for donations IN February for SPA,” said Andrews of the current campaign.

On Monday, he made a donation to the Elkhart County Sheriff's Department. Through the Mailbox Mates campaign that went from October to November, he raised a total of $1,500 to give to the department.

He said it is just a small part he can do to give back to those who serve.

“The point of it all is to express to the sheriff and the deputies who drive by that, it’s a ‘we have your back’ campaign,” Andrews said.

Supporters of the mailbox signs want their local law enforcement officers to know that the community supports them.

“It’s a high level of support, we appreciate what they’re doing and that’s just one way of us showing it,” said Randy Wilson who has a sign displayed on his mailbox.

Andrews said he got the idea from a group in Texas he found on Facebook who were putting blue stripes on curbs of people's homes to show they support the men and women in blue.

The group inspired him to create something similar.

“We have a lot of tragedies of officers getting shot and targeted around the country and that was kind of really what inspired me," said Andrews who is an Army veteran.