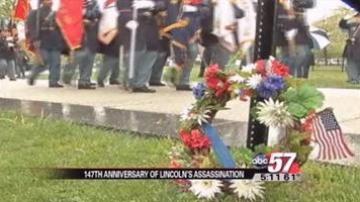 It was complete with a military procession to Lincoln’s tomb. Keynote note speakers for the ceremony say Lincoln is still relevant even in the 21st century.

"We as a society must move past a third grade understanding of Lincoln, recognize his faults, understand that he gave way to pettiness or anger, or pursued policies that seemed out of character to us today,” said Jeffry Burden