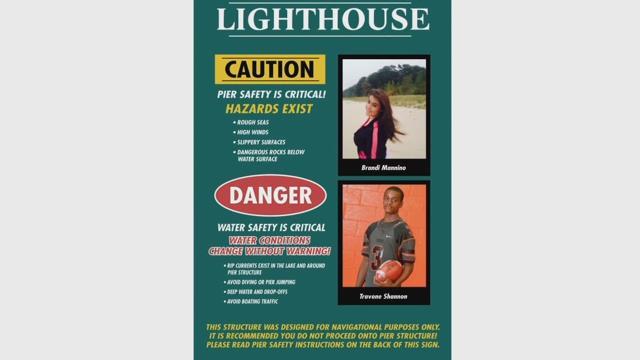 Siriano is a self-described beach bum who loves everything about his waterfront community, except for one thing.

“You don’t want to hear those sirens when you live on the beach,” he said. “It’s a terrible feeling.”

Those sirens on the beach are ones that blare when someone is drowning.

Right now, a memorial sits on the pier at Silver Beach, remembering the life of 17-year-old Travonne Shannon of Benton Harbor.

The teen drowned last Saturday while jumping off the pier.

“I want to try to do something to teach the kids, mainly, that it takes your life,” Siriano said, referring to the lake and not respecting it. “It’s not a swimming pool.”

So Siriano has designed a sign that honors the life of Shannon and another recent drowning victim, while also warning swimmers of all ages of the dangers of jumping off the pier.

He said the pier at Silver Beach lacks adequate signage, so he wants his design – which would ideally be 8-feet tall and nearly 4-feet wide – to sit right in the middle of the pathway.

“Somewhere between this first blue railing and where the pier steps up would be the perfect spot,” Siriano said, while walking the pier.

His idea is being welcomed online – his original Facebook post about the sign has been shared more than 400 times and ‘liked’ nearly 800 times – and at the lake.

Siriano said he wants to pay for the sign to be built and installed – a $1,000 investment – out of his own pocket.

“I just don’t think that money should be the object,” Siriano said. “So, there’s no cost to the city or to the county. I’ll supply the sign and it’ll be very, very well, professionally done and weather-proof, aluminum material, and let’s not even think about that part.”

“Let’s just get it approved and put it out there,” he said.

The St. Joseph city manager said installing a sign directly on the pier would require the approval of the Army Corps. of Engineers, along with (most likely) the county board.

In a phone call, the city manager said he would work with Siriano to determine what’s possible.

Siriano said his goal is to have the sign installed by July 4 weekend, along with a second sign on the Tiscornia Park pier.