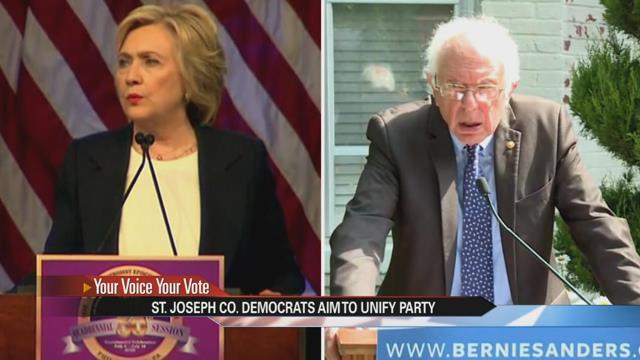 The Never Trump movement has former Bernie Sanders supporters saying, “I’m with her.”

“That’s what our country needs, to make sure Hillary Clinton is the president of the United States and not presumptive nominee Donald Trump,” said Tony Flora, Democratic Party Delegate.

“Hillary Clinton will make an outstanding president and I am proud to stand with her today,” said the Senator.

“My initial reaction was just shock,” said Jason Critchlow, St. Joseph County Democratic Party Chair. “Frankly it being July, so late in the campaign season, it’s so out of the ordinary.”

It was a shocking endorsement to some, but to others, it was reassurance of a Democratic Party victory come November.

“She can unite this country, she is clearly qualified to be president of the United States and I know I will be working for her election,” said Flora.

That’s a big statement for Flora as he had pledged support for sanders before Tuesday’s announcement and even introduced the senator during his South Bend Stump.

“Things don’t work out the way you think you want them to,” said Flora.

But Tony and others don’t see this as a loss.

Critchlow says Democratic voters aren’t as divided as many may think.

“The Bernie Sanders and Hillary Clinton thing, for as divisive as it seemed it was still not quite as bad as I think it was being made out to be at least not here locally,” said Critchlow.

And part of that is because quite a few in the party believe Sanders has left an impact on Clinton’s campaign.

“He accomplished key things that he set out to do so we’re glad to see that and now we have to get sec Clinton elected as President of the United States and see those policies put into law,” said Flora.