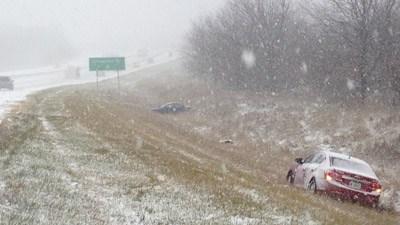 St. Joseph County Police are doing a number of things to prepare for more snow, but most significantly, they are pulling officers from units inside the building and putting them on the streets to help drivers.

St. Joseph County continues to see the consequences of heavy snow and ice, with reports of over 100 snow related slide offs and car accidents.

Police said the known major problem areas to avoid these next hours are the bypass on the west side of South Bend near US 20, State Road 2, and down towards State Road 23.

They also said roads get slick heading east near Elm Road and the bypass.

“We certainly know what areas are going to be affected because seems year in and year out they're similar. We make sure our personnel are deployed in a way that they're as close to that as we can,” said Thompson. On Thursday, the bypass was temporarily shut down between US 20 and State Road 23.

Police could not say whether parts of the bypass will be shut down again, but explained one big indicator in determining when they make the call to close it off.

“Is when highway service vehicles can't get through and when those vehicles have trouble moving, that's when we try to curtail the amount of regular traffic on the bypass for everyone's safety,” Thompson explained.

Police said drivers may notice more officers out on the streets today and they urge drivers to take this weather seriously.

“Make sure their vehicles are in working order, make sure their tires are good, brakes are good, windshield wipers, headlights. Its never a bad time in winter time to keep your fuel tank above half in case you end up getting stuck somewhere for a period of time, you can stay warm that way,” said Thompson.