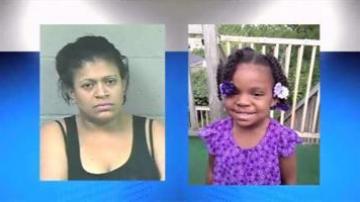 ST. JOSEPH, Mich. -- Amber Alert: The St. Joseph, Mich., police are searching for a girl who was abducted by her own mother.

Around 10:30 a.m., 2-year-old Chloe Christina West was taken from her mother's apartment in the 500 block of Court Street.

Judith Moscardelli has lived on Court Street for 40 years and she said there has been a number of rowdy renters in and out of the duplex next door to her home. So, she was happy when Lisa West moved in a ews months ago, "She was very neat, tidy and quiet".

Still, she said police have been to West’s home at least three times since she moved in. So, Thursday morning when she pulled up to see police park outside West's home again, she was not surprise. However, she was surprise to learn West had taken her 2-year-old daughter, Chloe West, against a court order.

"Basically they were in the mother’s apartment and the worker, the child protective services worker was in one room. The mother left the room for a short time with the daughter and didn’t return," said St. Joseph Deputy Director of public safety Al DiBrito.

"We don't know how she left. Initially we had a vehicle description. We have since located that vehicle and it doesn't appear to be associated with this. So, we don't know a vehicle or her mode of travel," said DiBrito.

Police said West has family in Texas and fears she could be trying to the leave the state, but  police do not think West has any intention of hurting her daughter.

West does have a criminal history and,  according to neighbors, she could have some mental health problems too. Police have interviewed her current boyfriend. Police said West and said she does not have her own car. Officials are still trying to locate Benton Harbor resident Wayne Henry, who happens to be Chloe's biological father. He was seen with West just the night before Chloe was taken.

Chloe Christina was last seen wearing a flowered summer dress and had her hair braided with multi-colored barrettes.

Lisa West was last seen wearing black shorts and a white t-shirt. She is 5-foot-5, 180-pounds, with black hair and brown eyes. She may be with a Benton Harbor man named Wayne Henry.