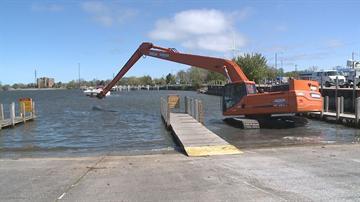 SAINT JOSEPH, Mich. - First it was commercial ships now many recreational boats are unable to navigate the St. Joseph Harbor.

A massive build up of sediment has made parts of the river so shallow that boating routes are closed off.

Monday, a privately funded plan to dredge was put on hold because costs are too high to fix the problem.

“This prop right here was brand new when we started off and you can see (the damage),” said Thomas Davis, a boater from Benton Harbor. “Because of the shallowness, it dug down into the dirt.”

Davis assessed the damage to his duel-engine yacht. “It’s too dog gone shallow,” he said. “There are a couple areas we hit that (were) 1 or 2-feet (deep).”

Davis didn’t make it out to the lake he hit the bottom of the river three times. “Right now that river is as shallow as I’ve ever seen it in my entire life.”

“This is actually going to be stuck here if we don’t get the river dredged out,” said Bob Myers with Pier 1000 in Benton Harbor. 70% of the boats at his marina won’t be able to navigate the river at this depth.

Pier 1000, other marinas and private donors collected money to dredge the river.

Monday the contractor was unable to mechanically dredge because the silt at the bottom was too soft and too deep. “We just found this morning that it’s not going to work,” said Myers.

In order to successfully dredge, the machine will now need to use a barge to float in the river. The cost is “much higher” for a barge than the amount raised privately.

Timing is also an issue. If the river isn’t dredged by May 1st, Michigan bans the work until July 15th for fish spawning.

If something drastic doesn’t happen before next week, according to Myers, many recreational boats will likely be unable to navigate the channel till at least mid-June. That’s if funding is found.

“It’s not only going to affect me and 1000 of us that do boating,” said Davis. “It’s affecting the whole state of Michigan because we’re a big tourist state.”

According to State Representative John Proos, no federal or state money is allocated to clear recreational boating routes.