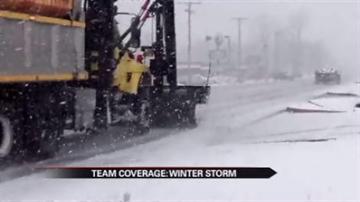 KNOX, Ind. -- Counties south of St. Joseph County, Indiana are expected to get the most snowfall over the next few hours. Starke County Emergency Management officials say they are ready for the snow.

"We've been preparing since yesterday for the storm. We've met with the highway folks, our EMS and some of the local fire,” said Ted Bombagetti, Director of the Starke County Emergency Management Agency.

Highway plows were pulled off the roads at 3:30 to give drivers enough rest to tackle the roads when the snow is heaviest.

In the meantime, a backup crew is on standby.

"Should any of the emergency services in the county need to go, they'll be escorted with some of the plow trucks,” said Bombagetti.

Even though they could get up to 8 inches of snowfall overnight, the winter storm is not what worries Bombagetti most.

"With the higher temperatures coming later in the week, we still have frozen ground and I'm afraid that with the rapidly melting of the snow, we'll get isolated areas of flooding,” said Bombagetti.

He’ll watch areas near the Kankakee River and low parts of the county closely.

"Basically, it's going to be a long, long several days for us here in the county,” said Bombagetti.

The county issued an advisory for travel on the roadways. They warn the roads are slick and hazardous.