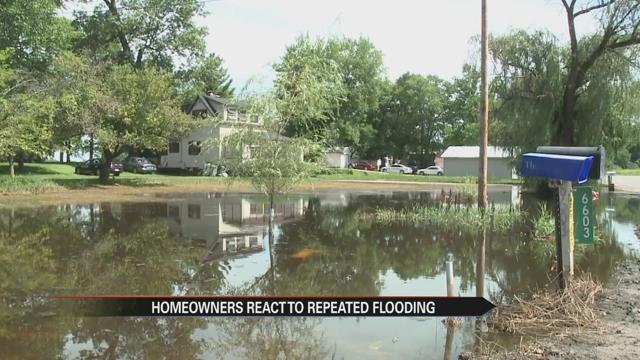 While there are areas that are still flooded, the highway department said strong winds have also uprooted trees.

Both of these issues combined are delaying summer road projects.

Homeowners along State Road 10 in Knox say their backyards are one big, stinky swamp.

It is a month long build up of water.

Some neighbors were forced to throw out valuables.

“Hopefully there’s not permanent damage to the property but we won’t know until it all dries up and we see what it looks like,” said homeowner Bill Nervig.

But just this past weekend neighbors could breathe a sigh of relief.

Crews with the Starke County’s Highway Department came out and pumped it all into nearby Bass Lake.

“It rained and instantaneously our swamp was back. It filled up really fast.” Nervig explained.

He said the challenge has been the amount of days it has rained.

“Not the amount of rain. The amount of days it’s rained. As we just get things caught up, just as we’re going to get into things, the guys have to go out and work on rain issues for two or three more days,” said Ritzler.

Ritzler said the rivers and lakes have not been able to contain all of this excess rain water and draining has been a slow and exhausting process.

Now important summer projects are getting pushed back.

“We’ve delayed our paving operations a little bit, to August and September. We were going to do those projects in June and July. But we’ve had to delay that because of all the rain we’ve been getting,” he explained.

Long term, Ritzler said the county is working to build up roads, meaning stones and pavement will be added to low spots in roads, to help decrease the risk of flooding.

They encourage homeowners to continue to call and report flooding, so they can come out and get it taken care of as quickly as possible.