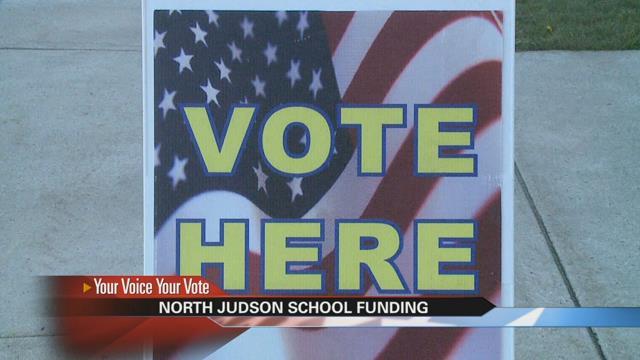 Stakes were high in Starke County as voters took to the polls to not only elect or re-elect public officials, but to decide the fate of the North Judson-San Pierre School Corporation.

The corporation has faced drastic budget cuts for the last few years and voters had a chance to vote for a referendum that could save the school.

“It stresses my parents out,” North Judson-San Pierre High School Senior Kaden Shepherd said. “But I think we’ll get through it.”

Shepherd’s family has a long history with the North Judson-San Pierre School Corporation. His mother and father went through the school system and now his father is the middle school principal and his mother is a kindergarten teacher.

“I just think we need to keep what we have in hopes of getting more,” Shepherd said.

Johnson has led efforts to overcome a $2.5-million budget deficit throughout the last five years and she is hoping Starke County voters will pass a proposed referendum that would give North Judson schools $1.5-million over the next seven years by raising residents’ property taxes.

“It is to increase our operating budget,” Johnson said.

Johnson said the school’s administrative staff has been cut and certain programs like the marching band have been dissolved.

“We made those adjustments to reduce accordingly,” Johnson said. “But we can’t ever get ahead. Every time we reduce, the revenue goes down.”

Johnson said she understands Starke County residents may not like a property tax hike, or that some people may have trouble affording it, but she said it’s necessary to keep North Judson schools afloat.

“We as a community owe it to our children to offer the best that we can,” Johnson said.

The proposed tax hike would cost an average Starke County homeowner roughly $700 in its first year but would then decrease to nearly half of that in the six years that would follow in the referendum.

“If the town doesn’t have a school then it won’t really be a town anymore,” North Judson-San Pierre High School Junior Nathan Hughes said. “Nobody would want to move in here.”

Hughes also said he is hoping that voters will be motivated to vote in favor of the referendum because the school corporation is the biggest employer in Starke County.

If the referendum fails to pass, Johnson said more job cuts and an increase in class sizes is likely.

UPDATE: After all of the votes were counted, 68-percent voted against the measure.