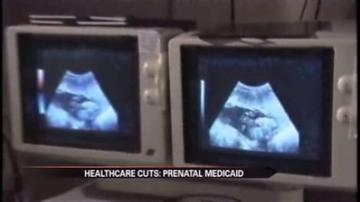 One Indiana lawmaker's proposal would limit prenatal care for women under Medicaid and already it is meeting resistance in the Senate.

Over the next seven years, cutting the funding would save the state $40 million.

"I honestly don't know what I would have done if I didn't have it," says Kasandra Sterry.

Like many women, Sterry turned to Medicaid during her first two pregnancies because she couldn't afford private health care, which is why she thinks it would be a big mistake to cut prenatal care.

"It's really upsetting because we're just trying to have healthy babies," says Sterry. "We aren't hurting anybody or doing anything."

Sterry says doing so would put women and their babies at risk if they are unable to go to their monthly check-ups.

"If people did not have medicaid for their pregnancies there would probably be a lot of things going wrong with a lot of babies," says Sterry.

No one knows that better than she does. During her second pregnancy she noticed something was horribly wrong. At just 30 weeks she went into labor and at 36 weeks she gave birth to Ellianna Jade.

Two days later, Sterry made the tough decision to take her baby off life support. Sterry learned that during her pregnancy, her little girl was not getting oxygen to her brain and her brain never fully developed.

Supporters of this bill, including Governor Mike Pence, say they support the proposal because starting next year, women will be able to get assistance through Obama Care.