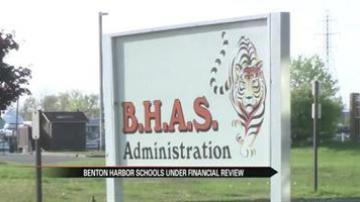 LANSING, Mich. -- The State of Michigan Department of the Treasury is looking into the financial state of Benton Harbor Schools. The district's deficit has increased dramatically over the past few years and the state may step in to get a handle on the problem before it's too late.

"Any time that you see a deficit increase and increase fairly dramatically over a short period of time, that's certainly a concern," said Terry Stanton, Director of Communications for the Michigan Department of Treasury.

The Department of Treasury says Benton Harbor Schools are more than $15 million in debt.

Now, the state is taking a closer look at the districts' budget.

In 2007, the school district was just $3 million in the hole, but in 7 years, the debt has ballooned.

Stanton says when school districts rack up millions of dollars in debt, it all comes down to one thing.

"They were spending more than they were taking in

Michigan s Governor Snyder appointed 5 people to review Benton Harbor Schools' budget and determine whether or not the district is in a state of financial emergency.

"If it is found that the district is in a financial emergency, then the school district will pick how that emergency is going to be addressed whether that be a consent agreement with the state, er manager, neutral evaluation or bankruptcy," said Stanton.

Stanton said it would be difficult to know what would happen if the district declared bankruptcy because it hasn't been done before.

Benton Harbor Schools are not the first district to be under state review.

"I don't know that there's a direct correlation you can point to there but often times you're looking at areas that have struggled financially for a period of time and it isn't necessarily anything that crops up overnight," said Stanton.

The review board is expected to look into the budget by next week.

They have 60 days to take a close look at the budget.