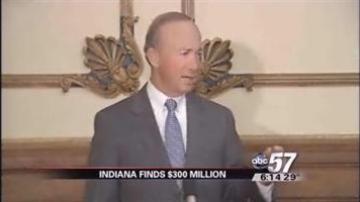 INDIANAPOLIS, Ind. -- Imagine finding $300 million you didn't know you had, does it sound too good to be true?

The state of Indiana is in that position. The windfall is from corporate income tax collections. The money was mistakenly put into a holding account back in 2007, and wasn't credited to the general fund.

Governor Daniels says he doesn't plan to spend the money, but some of it could be returned to taxpayers.

"Our view is you spend, government should spend what it must,” said Daniels. “There's another that government wants to spend everything. Government can get its hands on, but that's never been our outlook."

A decision on the surplus could come next year. Indiana law allows taxpayer rebates, if the state surplus exceeds a certain percentage of revenue.