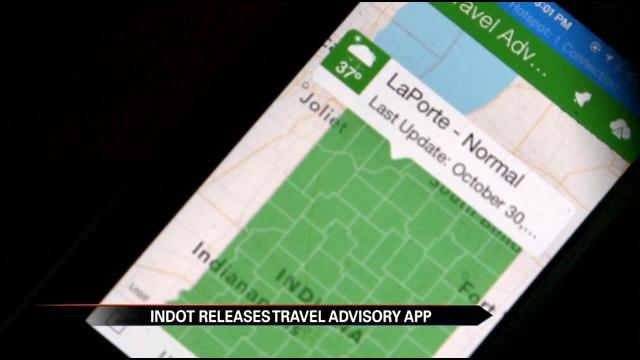 Having the most up to date information on how the weather is affecting the roads can help keep drivers safe. But many in the area shared the same response when asked, “If they ever used the State's 'Travel Advisory' app?”

Ash Igra of La Porte says, “No I never have!” David Boyce who often travels through Indiana for work says, “Nope not yet.” And Amanda Plank of Chicago asked, “Is it brand new?”

None of the travelers knew the app existed. Amanda Plank travels often through Indiana to visit family and expresses regret for not using the app in the past.

“I haven't used the app before but I should. I mean we travel quite a bit. Today we are traveling from Chicago to Ligonier Indiana,” says Plank.

But to Plank's defense the app is new and was just released last week. The idea for the ‘Travel Advisory' app came after five million people visited the State's travel advisory map online last winter.

The mobile app is free and provides up to date travel advisories and weather conditions by county in the state of Indiana.

The holiday travelers I spoke to use other apps to plan their travels.

“That's exactly what I used to get over here actually. I used gas buddy to find the lowest prices in the closest distance,” adds Igra.

So the travelers are open to technology that will give them updated information on road conditions.

“Yea we travel through here quite a bit for it to be useful. I mean we kind of take the same routes for the most part but yea I think it would be helpful especially if it's free, ya know!” says Plank.