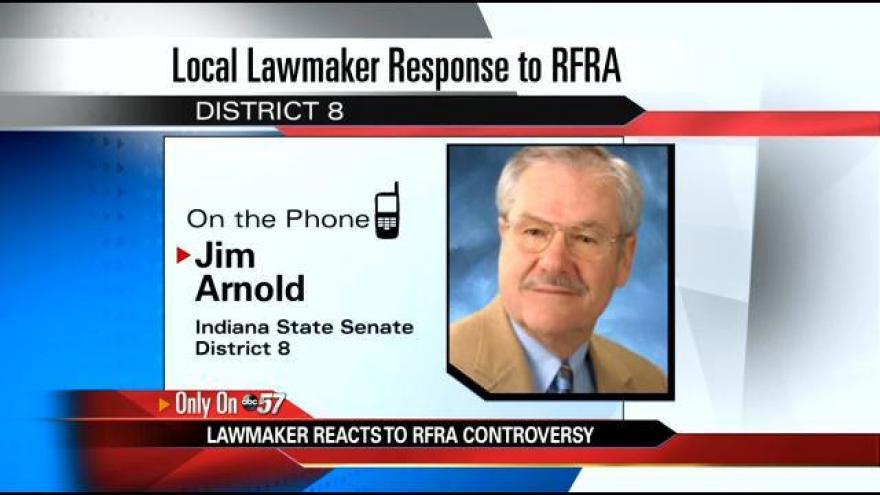 Members of the state's democratic caucus are speaking out against the religious freedom restoration law.

Arnold addressed the pending changes to the law that the governor proposed ensuring businesses wouldn't be allowed to discriminate.

He said the damage has already been done and Indiana is being misrepresented nationally by this law.

He said the governor is taking a “band-aid approach” to a problem that requires major surgery.

He also said in order for the proposed new legislation to be effective, the governor would have to start over and reach across party lines.

“The only way to repair this is to repeal that law totally, take time, make it a bi-partisan effort to make sure that people that have been excluded from this bill are included in this bill and re-address the civil rights bill.” said Sen. Arnold

ABC 57 News first told you the story about a Walkerton restaurant that said it would refuse to service a wedding for a LGBT couple.

He had strong words for the owners.

“The vast majority of people in this country are not going to stand by and watch that kind of activity unfold," he said. "If that's their stand I hope they enjoy eating their pizza because I don't think anyone else is going to.”

Sen. Arnold says he's upset by the news because of the negative attention it's bringing to a town he says is a great community.

He said this kind of thinking has no place in this town.

And the Religious Freedom Restoration Act is not an excuse for them to discriminate.