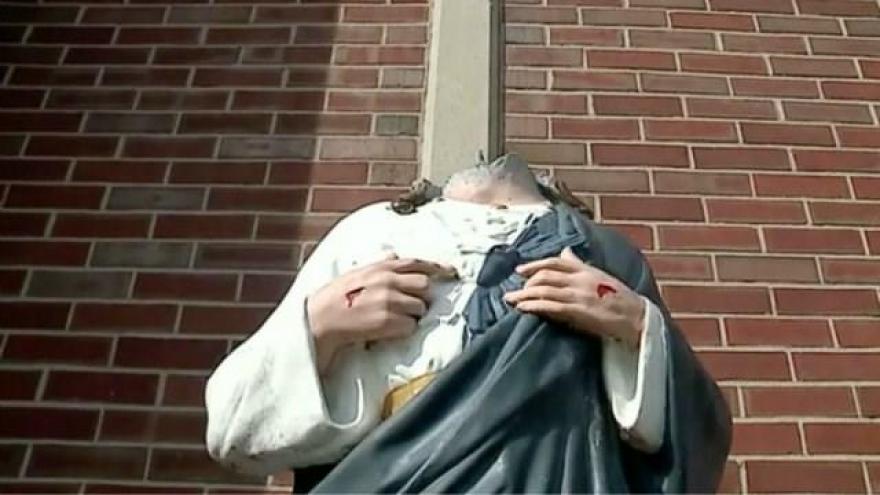 (CNN) -- To millions of people, the image of Jesus Christ stands for peace, love, and compassion.

So it's a little startling to see a statue of Jesus outside an Indiana church defaced twice in the past two weeks. Once on a Sunday, even.

The Cottage Avenue Pentecostal Fellowship in Indianapolis installed the concrete statue five years ago after it was donated by the daughter of one of its members. But on the statue's first day in its new home, the church saw a glimpse of the vandalism to come.

"The first time we put it up, they knocked it over," Pastor Brad Flaskamp told CNN. The statue was put back in place and the church thought no more of it for years, he said.

Until two weeks ago, when churchgoers discovered their familiar Jesus in an unfamiliar state. Someone had beheaded the statue.

Luckily, Jesus' head was left behind and the church was able to reattach it on Saturday. But the next day, vandals struck again.

And this time, they took the head with them.

"It's still headless, we haven't gotten it fixed yet," said Flaskamp, adding that the rest of the statue remained standing outside the church. "Don't know if we can."

An investigation has been underway since the first beheading two weeks ago. But with no surveillance footage of the incidents, police are relying on information from the public.

Flaskamp, perhaps mindful of Jesus' teachings on forgiveness, is hoping for a friendlier resolution.

"If whoever it is would come in and return the head and ask us to forgive him, we'd forgive him," he said. "That's what it's all about."