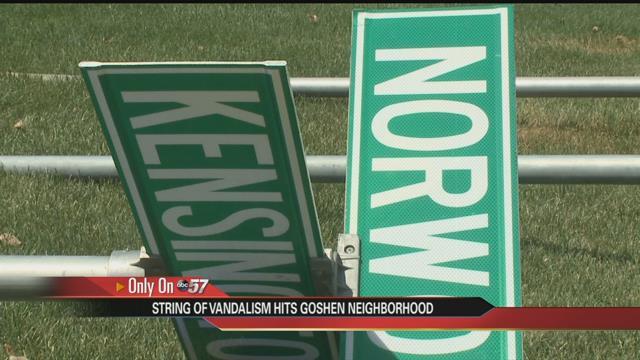 Police are investigating an act of vandalism in a Goshen neighborhood where street signs ended up in a tree, a yard and a swimming pool.

The street signs were uprooted from Fairfield Farms and placed in seemingly random parts of the neighborhood.

Connie Myers, of Brentwood Avenue, was surprised to hear she wasn’t the only one experiencing this.

“I backed out of my garage, and I noticed this sign leaning up against the tree and I looked over and there was nothing in the hole,” said Myers.

Three other street signs were also stolen from the same subdivision.

They were found a short walk away in front of another family’s home and in their swimming pool.

“It surprises me that it would be vandalism but it looks suspicious now,” said Myers.

A police report was filed Tuesday with the Elkhart County Sheriff’s Department, but officers say they have no leads.

The crime has many residents wondering- how could one person do this?

At 10 feet, 40 lbs., and 30 inches deep into the ground, it would be nearly impossible for one person to do this on their own.

“Well I just hope they find out who did it. This could have been in my swimming pool like the other people,” said Myers.