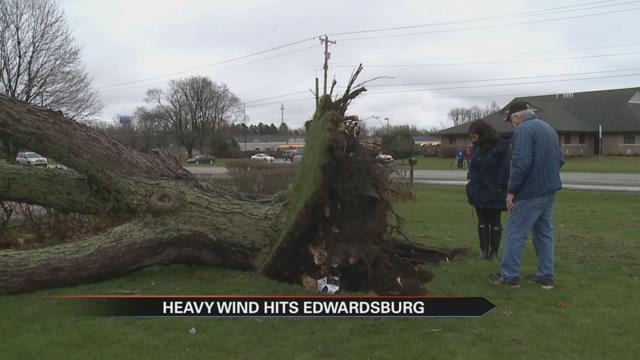 Thursday’s storm caused property damage and power outages throughout Michiana. Edwardsburg was one of the areas hit the hardest.

Dozens of trees were uprooted, falling on homes and power lines.

Jacqueline Armstrong says she was driving to her home on Main Street after picking her kids up from school around 3:30 p.m. when the sky suddenly became dark.

“It started down pouring and all kinds of debris and everything flying through the air very fast,” said Armstrong.

The traffic on Main Street was backed up as crews worked to get debris out of the street. As Armstrong approached her home of four years, she realized her’s was one of the homes that had been hit.

"First thing I had to do was make sure my father was ok who was upstairs and then I looked at the damage. It’s heart wrenching," said Armstrong.

Fire crews say no one was injured during the storm but many homes, including Armstrong's, suffered serious damage.

“We actually have a tree through two windows downstairs. We have a branch through the upstairs and it ripped part of our roof off,” said Armstrong.

Paul Platz says he has lived on Main Street for twenty years but has never seen a storm cause this much damage.

Platz says the storm uprooted three trees on his property in a matter of minutes. A tree in his back yard fell on a power line, causing the houses in his neighborhood to loose power.

“A little hectic for awhile but all in all it went well,” said Edwardsburg Fire Chief Bruce Stack.

Private contractors were also quick on the scene.

Although the damage could take months to repair, Armstrong says she is just grateful it wasn’t worse.

“This can all be fixed but everybody is safe and that’s all that matters,” said Armstrong.