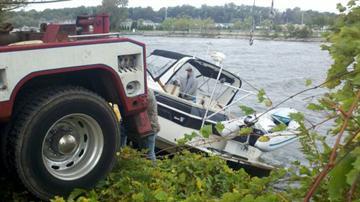 ST. JOSEPH, Mich. – The overnight storm surge sent boats careening across marinas in St. Joseph and South Haven.  Along Riverview Drive a 34-foot boat, named the Riff-Raft, broke loose from Brian’s Marina and drifted onto the rocky shoreline across the marina.  Crews from Great Lakes Towing were sent out to bring it back late Friday morning.

“We’ve been up since about 3 a.m. with boats that have broke loose from the storm surge,” explained Richard Lenardson of Great Lakes Towing.  “Just not tied down properly is mainly what it is.”

In the case of the Riff-Raft, the crew from Great Lakes Towing drove one of their large tow trucks up to the shore line to lift the boat up and off the rocks.  With the storm still whipping through St. Joseph, the job wasn’t easy.

Attaching tow cables to a boat being tossed by waves isn’t an easy task for the diver in the water.

“You’ve got current coming up river from the storm surge and then the river current underneath you so you’ve got a mixed current there that’s really difficult to be in,” Lenardson described.

The diver, Darin Hays, has 15-years experience in the water, but Friday’s work was still difficult.

“Oh yeah, definitely, this makes it more difficult to get the boat when it’s thrashing and the waves are thrashing you into the boat,” Hays explained.

Thankfully the water temperature was still above 50-degrees, which made the job slightly easier.  Hays complained of sweating in his diving suit.  Towing boats tossed by the storm had already been quite a task by the time the crew reached the Riff-Raft.

“We had another boat up in South Haven, that was a 56-footer,” Hays described.  “That was a big one.”

Boats up and down the Lake Michigan shore broke loose from docks as the high winds blew in.

Despite the hard work, the crew from Great Lakes Towing all expressed that they love their job.

“I like it, it’s thrilling, it’s dangerous, I love it,” explained Darin Hays.

But, for the owners of the Riff-Raft the storm won’t be so thrilling.  The crews estimated that the damage to the boat could cost up to $10,000.