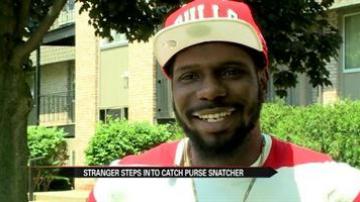 MISHAWAKA, Ind. -- South Bend Police are searching for a man who preys on women while they're unloading their groceries. In the last few weeks, four women have been attacked and robbed in grocery store parking lots. When something similar happened in Mishawaka, a stranger tackled the suspect.

The victim was in the front aisle near the checkout at Meijer's when a man stole her purse.

The suspect ran out the door and into the parking lot.

Solomon Moore had just dropped off his job application and was almost to his car when he heard the victim screaming.

"I'm thinking someone's fighting in Meijer's and then I hear 'My purse!'" said Moore.

Moore says the next thing he knew, he was running.

"Not even thinking. Hat flew off, dropped my keys, dropped my phone and tackled the guy. Held him down until police came," said Moore.

Moore's girlfriend was still inside checking out, but saw the whole thing.

"Everybody was just like pointing and yelling and then I finally get out there and I see he has him in a chokehold," said Julia Delmonte.

Moore says he held on, making the job easy for the first police officer on scene.

"He was like 'Wow, you got him?' Most of them were shocked, handshakes, good jobs, bystanders, women giving me hugs, I felt special," said Moore.

So will this help him land the job?

"Meijer's did say if I was to be hired there that they can't actually apprehend people. So they was like, 'If you do work here you know you can't do that anymore?'" said Moore.

Police don't recommend doing what Moore did because you do run the risk the suspect will try to harm you.

They did say they were thankful Moore stepped in.