Strong winds cause semi to rollover 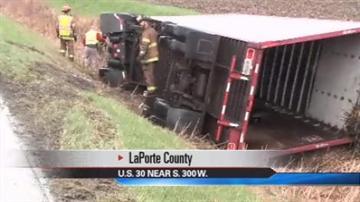 LAPORTE COUNTY, Ind. -- Truck and bus drivers do not like strong cross winds or standing water – but Thursday’s rain storms brought both. That led to a few accidents Thursday morning, including two semi accidents.

A strong crosswind that catches a nearly empty tractor trailer just right can actually flip the truck over.

"I felt the back of the trailer get light, started going over, there's not much can do,” said driver Chris Cook.

He had heard of this happening to other drivers, but never though it would happen to him.

"I just thought it was kind of fishy, you know, easy to explain, oh yeah the wind got me; but it happens,” said Cook.

Veteran truck driver John Mechen was on the Toll Road a little later in the day. He didn’t experience the strong winds but says he knows what Cook is talking about.

"I've had this trailer where the wind would rock it and it would come right over on the tires,” said Mechen.

Bus drivers also had to deal with the bad weather.

According to tour guide Terry Tierno, the biggest problems were in the Chicago-land area Thursday morning.

"We ran into quite a few closed down roads, had to do some detours,” said Tierno.

The wind has died down and should not be a problem for large trucks and busses for the rest of the night.

The rain is sticking around and that will reduce visibility Thursday evening.