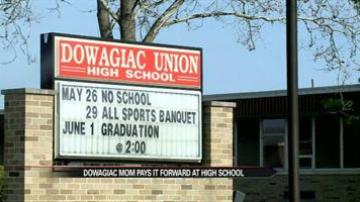 DOWAGIAC, Mich. -- A Dowagiac student says he was humiliated when school officials took away his lunch because there wasn't enough money in his account. After his mom heard what happened, she took matters into her own hands.

"It was really embarrassing, especially in front of the whole class," said Dominic Gant, a junior at Dowagiac Union High School.

On Friday, Dominic was served his normal cafeteria lunch, but just as soon as he was served, his lunch was taken away.

Dominic had an outstanding balance of less than $5 in his lunch account. His high school, like many other schools, has a policy that denies a hot lunch, and sometimes any lunch, to students who can't pay.

"I was appalled that he was denied lunch and his lunch was taken out of his hands over $5," said Amanda Keown, Dominic's mom.

She was so upset her son was sent home hungry, she immediately contacted the school. They told her the balance doesn't matter, even if it's a small amount.

"She asked me where is the cutoff, where do you draw the line with the charges, when do you say no more? And I said there shouldn't be a line," says Keown.

So she took matters into her own hands. She didn't want to see another student be sent home hungry, so she paid off every student's outstanding balance in the entire high school.

"I realize I didn't have to do that but I don't want another kid going through what my son went through," said Keown.