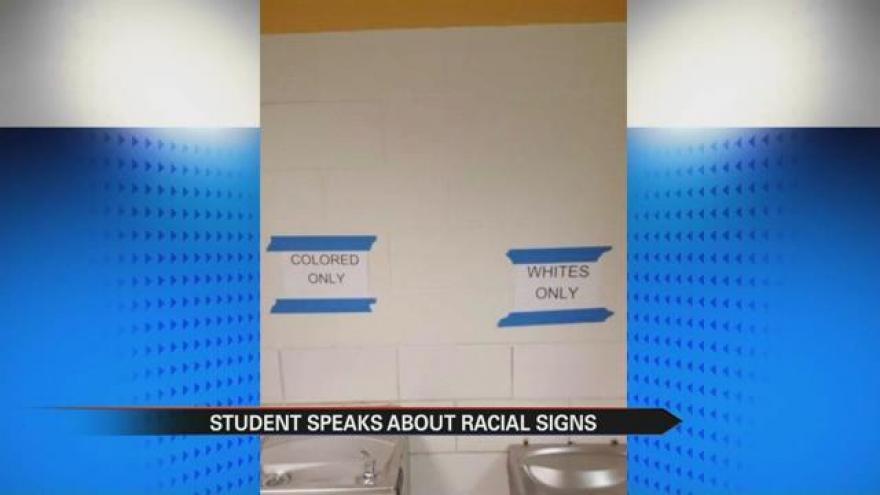 Shane Williams, a junior a Riley High in South Bend, isn’t at school on Friday.

Instead he’s at his family’s radio station fielding phone calls.

Today Williams is the topic of conversation, because he is suspended.

“I’m up for expulsion from South Bend Schools. But to me that’s the risk you need to take if you want social change,” Williams said.

And this is how he tried to bring about social change.

Thursday morning he posted “Colored Only” and “Whites Only” signs above 12 water fountains throughout the school.

“Some people don’t see the issue. But when you hear someone say “Oh, don’t you just hate [expletive deleted]” then obviously we have an issue.”

Williams wanted to get his classmates thinking about racism.

“At Riley, racism is overly casual,” he went on.

Williams said, “Some people saw it as a joke. Some people were offended.”

And some were glad he brought light to the issue.

Williams said every single day he hears racist remarks while walking through the hallways of his south side high school.

He said he’s tried on numerous occasions to get the attention of school administrators.

“But when we do, like I’ve done times before, I usually just get blown off,” he explained.

On WUBS, the city’s first black-owned family radio station, he talked about the disciplinary action taken against him.

“My speaking out was compared to bringing a loaded gun to school,” said Williams.

He said school administrators told him his actions could have incited a riot. Williams was suspended for five days.

Now students have created the hash tag on social media “Stand Up For Shane.”

ABC57 reached out to South Bend Schools and did not hear back.