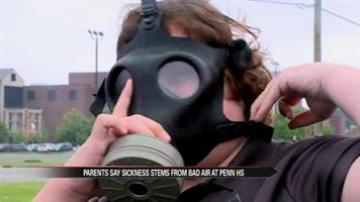 ST. JOSEPH COUNTY, Ind. -- A Penn High School student says he is being poisoned by the air in his school. He believes the chemicals and mold in the air are making it difficult for him to breathe. His family is getting the Indiana Department of Health involved.

In a few days, 16-year-old Cody Hicks will go to Indianapolis to get tested by a toxicology specialist. He hopes to find an answer to his mysterious health problems.

"Think of your lungs burning and it felt like something was stabbing them," said Hicks.

That's how Hicks says he feels when he walks the halls of Penn High School.

He has dozens of doctor notes, prescriptions for every allergy medication in the book and 4 pages listing his excused absences.

"My doctor was completely baffled- he had no idea. He said an allergic reaction, but I'm not sure what's causing it," said Hicks.

Hicks says the only way he could walk down the halls without wanting to collapse was to wear a gas mask.

Hicks says he wasn't allowed to walk the halls with the mask on.

His mom contacted the Indiana Health Department. They conducted an indoor air quality evaluation at the school.

The Health Department sent a letter to the superintendent on June 12 giving the district 60 days to take action on three deficiencies.

They include classrooms that exceeded the acceptable level of carbon dioxide, stained ceiling tiles in classrooms that show a moisture problem and use of chemicals such as Windex and other cleaners that aggravates respiratory conditions.

We contacted the school and the secretary said both Superintendent Jerry Thacker and Principal Steve Hope are at a conference.

She tried to get a hold of them for a comment or to set up a future interview and we are still waiting for details.

If you have heard any complaints from other students, know of students with similar issues, contact ABC57.