Student that brought weapons, ammo to school has bond set at $100,000 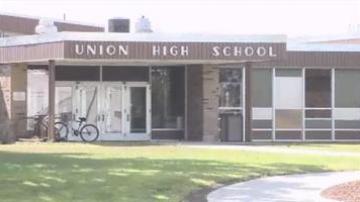 DOWAGIAC, Mich. -- A 17-year-old Union High School junior was charged with eight felony counts stemming from bringing weapons to school and leaving them in his SUV. The incident unfolded yesterday in Dowagiac.

The student just turned 17 two days ago, which means Kocsis is now considered an adult in the state of Michigan and he will have to face his charges in the eyes of the legal system.

He faces three Counts possession of a weapon in a weapons-free school zone, two counts of felony firearms, and three counts of carrying a weapon with unlawful intent.

Cass County Prosecutor Victor Fitz stated in court the weapons in Kocsis' SUV were a M1 Carbine, 12 gauge shotgun, and a KaBar knife with a blade more than 3 inches in length.

Prosecutor Victor Fitz asked the Judge to consider setting a $100,000 cash or surety bond for Kocsis based on the fact over the past two days he brought several weapons to school along with several rounds of ammunition for the guns.

Fitz said, "there are no excuses to bring weapons to school, it's an extremely dangerous situation and we know this from tradgies that have unfolded across our country."

According to investigator's interviews, the prosecutor said while Kocsis was talking to a friend and classmate in a heated fashions on Wednesday he stated he was sick and tired of people messing around with him. He went on to say, if anyone touched him or his vehicle he was going to shoot them. He said he would get the guns and he would shoot someone and then he began moving towards his vehicle in an angry state, that's when one of his classmates physically stopped him from getting to his truck. His friend said he was fearful of what he threatened to do.

Apparently what set the 17-year-old off was in order to park his vehicle in the student parking lot he needed to have a hang tag and he did not have one. When a staff member confronted him about the hang tag Fitz said Kocsis went off.

Fitz said the situation was even more dangerous because Fitz said Kocsis' SUV was not even locked during the two day period that he had weapons in his vehicle and several students knew he had these items in his SUV.

The Prosecutor also noted during the court proceeding that Koscis checked out a book from the school library called "Blank Confessions". The plot of the book is a young person is angry with other people because he feels he is bullied and he shoots and kills those people who are bullying him. Fitz said, "So in light of the other circumstances that heightens concern for the public's safety."

Kocsis' family was in the courtroom while he was being arraigned. They refused to comment, however as they walked away his mother told ABC 57, "this is not true- this is all wrong!"

A google search of the Union High School juniors name revealed he took part in the Dowagiac, Michigan Scholastic Clay Target Program and he competed at the state level. Kocsis is listed as earning a bronze medal in the junior varisty level competition held on July 2nd, 2011.