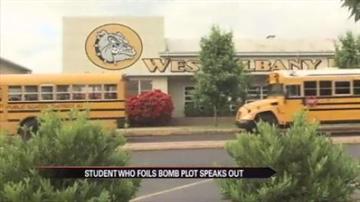 A teen in Oregon is being credited with saving his school and hundreds of lives for not being afraid to speak up.

Junior Truman Templeton was friends with the teen who was suspected of plotting a Columbine-style attack on his high school.

He said he did not know if it was all a joke but instead of waiting he came forward and told police.

"The tipping point for me was when I was just worried about being in school. OK, school is supposed to be a safe and secure environment. I should not have to worry about this kind of stuff," said Templeton.

The principal, staff, and entire student body say that Truman's actions saved them all.

The 17-year-old suspect, Grant Acord, is being held on $2-million bail.