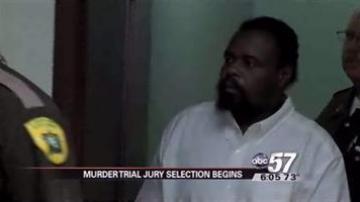 He is accused of murdering his 10-year-old son last fall and beating his 14-year-old.

On Monday 25 possible jurors showed up to start the selection process.

The judge asked the room of 25 who was familiar with Terry Sturgis and what he’s accused of, and everyone accept one person raised their hands.

So the 24 people familiar with the case were interviewed individually by Judge Miller and the attorneys.

13 possible jurors moved along in the process, and were asked to return at 4 p.m. on Tuesday to continue.

On Tuesday two more sessions similar to Monday’s will occur, first in the morning, then the afternoon.

The people that move forward from Tuesday’s groups will join the 13 who moved forward from Monday to continue the selection process.

The trial comes after a last minute plea deal fell through on Wednesday.

A judge stopped proceedings after Sturgis couldn't admit to hitting his son, Tramelle, in the head with a wooden pole.

He did, however, admit to abusing him.

Sturgis was arrested in November.

He faces 14 charges, including murder, battery, and neglect.