Sturgis trial: Son beaten and burned with more than 60 injuries 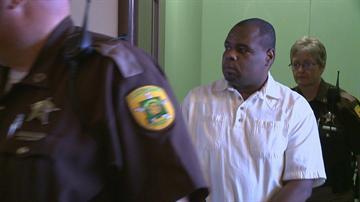 ST. JOESPH COUNTY, Ind. – Thursday was the first day of testimony in the Terry Sturgis murder trial where it was revealed that his son’s dead body had more than 60 new and old injuries. Sturgis is facing 14 counts, one of which is the death of his 10 year-old son Tramelle.

Tramelle was pronounced dead in the early morning of November 4, 2011 and his father is accused of beating him to death with a deadly weapon.

During opening arguments on Thursday the State Deputy Prosecutor Joel Gabrielse said that Terry Sturgis, Sr., got a voice message from the principal of his older son’s school. The principal told him that his son had stolen pencils from the art room.

When Sturgis arrived home that night of November 3rd, he said to his son, "Me and my stick are going to have some fun," said Gabrielse.

Gabrielse continued and said Sturgis duct taped his son’s wrists together and beat him.

Then he turned to 10 year-old Tramelle and started beating him until he vomited and could no longer speak, according to the prosecutor.

He said Tramelle’s body had a number of broken bones including his left arm, tailbone, rib, skull, and an older injury of a broken right arm.

The defense countered with their open argument and said, "We’re not going to dispute some of those counts," said Defense Attorney Jeff Kimmel.

Kimmel said what the state said is a "wooden club" used in the beating, the defense believes is a "stick" therefore the "stick is not a deadly weapon."

Kimmel continued and said that Sturgis never had the intent to kill his son.

"The injuries that Terry caused were not the cause of death," he said.

Kimmel said Tramelle died from asphyxiation, which they said was caused by his throat being clogged with vomit.

Seven witnesses took the stand on Thursday. The longest was Metro Homicide Crime Scene Technician Sergeant Thomas Cameron took the stand for about two and half hours.

Cameron said he took photographs of Tramelle’s body soon after his death at Memorial Hospital.

He said he saw "in excess of 60 injuries." He said he saw 14 fresh burn marks, along with a number of other injuries varying in levels of healing, so some were new and some were old.

He said he took a total of 62 pictures of Tramelle's injuries that day.

When these photos were shown in the courtroom many jurors wiped tears from their eyes.

Tramelle’s mother, who was in the courtroom on Thursday, put her head back looking towards the ceiling and appeared to try and hold back tears.

"You can actually see the steam dents," said Cameron.

The state presented almost 80 photos to the courtroom on Thursday.

Many of them were of the crime, the Sturgis’ home on West Washington in South Bend, which showed many areas splattered with what appears to be blood.

Cameron said he took a total of 760 photos of the house.

Prosecutors presented a number of items as evidence inside the courtroom on Thursday.

They showed a one inch wooden dowel rod with duct tape on the end of it.

This is what the state referred to as a "wooden club", that the crime scene technician said had red smears on it when he found it.

Prosecutors also showed a commercial grade hair curling station, which they suggested Sturgis used the ends of to burn Tramelle.

Cameron said the figure eight shape on the end the hair tools are similar in size to some of the older burns on Tramelle’s body.

Prosecutors also showed a white bath towel that Cameron said was "blood soaked", and broken table legs that were taken from the home during a second search warrant that was served.

On Thursday, a number of first responders also gave their testimony.

This included two South Bend Police Officers who were the first on the scene when 9-1-1 was called the morning of November 4th.

They said they were dispatched for "a young boy not breathing."

Also the SBPD midnight shift supervisor gave his testimony, along with an EMT who responded.

The principal of Greene Intermediate Center and a second representative of Metro Homicide were the other two witnesses on Thursday.

Testimony will continue on Friday. The trial is expected to run to the end of next week.