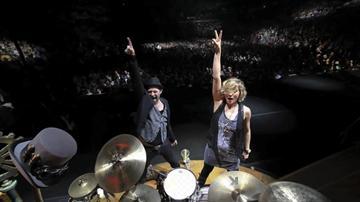 Sugarland is touring with Sara Bareilles for "The Incredible Machine Tour 2011."

Bareilles was able to perform Saturday at the Indiana State Fair before the state collapse tragedy.

Sugarland was just five minutes from taking the stage when it collapsed in 70 mph winds.

Officials have not said whether Sugarland will come back to Indianapolis and perform at a different venue for fans or if tickets will simply be reimbursed.

The band is scheduled to play its first concert since the tragedy Thursday in New Mexico. They will be performing at the Hard Rock pavilion at 7:30 p.m.; Bareilles is also scheduled to perform.