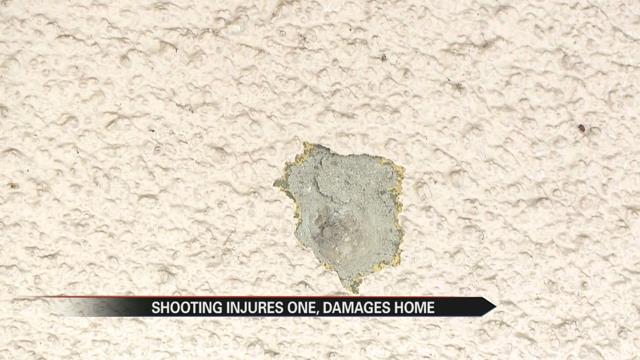 It happened around 8 p.m. on the 800 block of Sherman Street.

The shooting injured a man’s foot, and damaged a neighbor’s home.

Barton says police pointed out the bullet hole on the exterior of her home during their investigation.

“He showed me the bullet hole on our front porch and he said, ‘Was this here before?’ I said ‘No, it was not,’” Barton said.

The bullet barely missed her front window but still ripped a hole through the home she’s lived in for more than 30 years.

“I was appalled. I was relieved that it isn’t worse than it was. I was angry that this neighborhood has come to that, and felt powerless,” Barton said.

Police say they think it all started outside one particular house.

It’s a house Barton says is a problem property.

Now, she’s looking for answers from the landlord.

The councilman for that area, Tim Scott, is also taking action.

Scott says he’s also investigating any houses involved in the shooting, and trying to make sure this problem doesn’t repeat.

“You have to be a good neighbor and be responsible and have responsible tenants within your properties,” Scott said.

That’s what Barton says she’s done, which makes it all the more frightening to know bullets were flying so close to home.

"I have done my best to be a good person, a good neighbor, and this happens and I have absolutely no control,” Barton said.