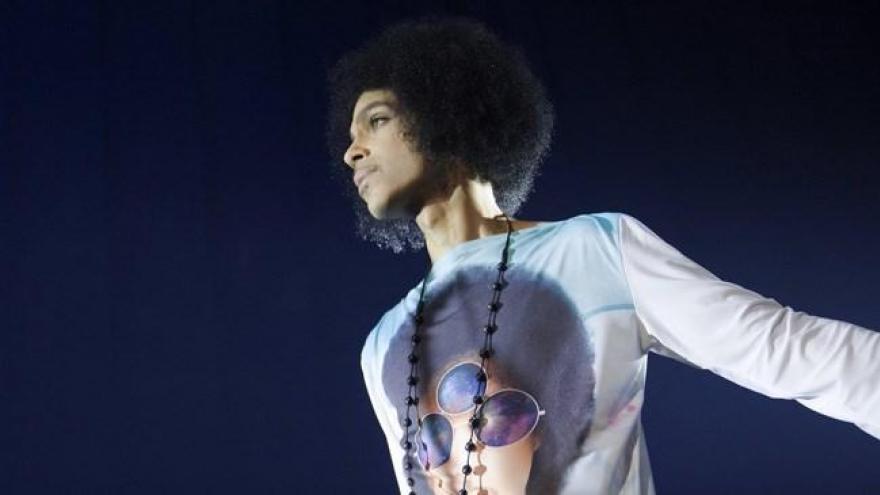 (CNN) -- Prince Rogers Nelson, the eclectic virtuoso who penned such gems as "Kiss," and "Let's Go Crazy" and who took on the music industry in his fight for creative freedom, died Thursday at age 57.

"It is with profound sadness that I am confirming that the legendary, iconic performer, Prince Rogers Nelson, has died at his Paisley Park residence this morning," publicist Yvette Noel-Schure said.

Earlier Thursday, police said they were investigating a death at the Paisley Park studios in Chanhassen, Minnesota. They responded to a medical call and found the singer unresponsive in an elevator, Carver County Sheriff Jim Olson said.

A massive outpouring of grief followed on social media. Some are saying the icon's death "is what it sounds like when doves cry," a reference to his monster hit from 1984. Fans rushed to record stores to pick up vinyl and other Prince memorabilia.

Kaleena Zanders went to Amoeba Music in Los Angeles to buy a vinyl edition of Prince's iconic album "Purple Rain" on Thursday. She cried in the car as she drove there.

"Prince means the future, because he's changed music, everyone in music, he's influenced every person, and I believe that he represents our future, and it kind of died with him in a way."

Just this month, Prince made news, but it wasn't for his music. He said he wasn't feeling well, according to The Atlanta Journal-Constitution, and canceled a concert at the Fox Theater in the Georgia city.

Some days later, he took the stage in Atlanta to perform an 80-minute set, unusually short for him. The stage was engulfed in lavender smoke. It was just Prince at his piano. He played his classic songs but kept the mood light and fun -- at one point showing off his skills with a version of the Peanuts theme song.

After the performance, the singer's plane made an emergency landing, Noel-Schure told CNN. Prince reportedly was rushed to a hospital in Moline, Illinois. At the time, the publicist said, "He is fine and at home."

The singer's fame never waned through the decades, but he was considered synonymous with the 1980s. His fame reached a fever pitch with the 1984 film "Purple Rain," about an aspiring musician, his troubled home life and a budding romance.

He was a prolific musician. Between 1985 and 1992 he released eight albums, one per year, including the soundtrack for Tim Burton's "Batman." He starred in two more movies during that era: "Under the Cherry Moon" and "Graffiti Bridge." He also put out a concert film. "Sign 'o' the Times" hit theaters in 1987.

He infamously changed his name to an unpronounceable symbol in the 1990s during a dispute with his record label, Warner Bros. He started to become known then as the "Artist Formerly Known as Prince."

In 2000 when the singer's publishing contract with the company expired, he reclaimed the name Prince.

Prince won seven Grammy Awards and earned 30 nominations. Five of his singles topped the charts and 14 other songs hit the Top 10. He won an Oscar for best original song score for "Purple Rain."

The singer's predilection for lavishly kinky story-songs earned him the nickname "His Royal Badness." He was also known as the "Purple One" because of his colorful fashions.

His sound was as unique and transfixing as he was. He created what became known as the Minneapolis sound, which was a funky blend of pop, synth and new wave.

Controversy followed the singer and that, in part, made his fans adore him more.

"Darling Nikki," a song that details a one-night stand, prompted the formation of the Parents Music Resource Center. Led by Tipper Gore, the group encouraged record companies to place advisory labels on albums with explicit lyrics.

Prince left his imprint on so many aspects of popular culture -- from movies to sports to politics. As the Minnesota Vikings prepped to take on the New Orleans Saints in the 2010 NFC championship game, Prince wrote a fight song, "Purple and Gold," to inspire his home team. The Vikings lost. He was the halftime performer at the Super Bowl in 2007.

Last year, while addressing the unrest in Baltimore after the death of Freddie Gray in police custody, Prince released the song "Baltimore." He performed at a benefit concert in the city and gave a portion of the proceeds to youth groups there.

Mathieu Bitton, a Grammy-nominated art director who had known and worked with Prince since 1988, was reeling Thursday.

"I'm completely devastated," Bitton said. "Just watching Prince perform completely changed my life, and his music always just changed everything. He's, for me, the greatest performer of all time."

Bitton said he was a teenager when his dad sneaked him into a nightclub in Paris to watch Prince play. He got to talk with the singer, too.

"I was obsessed with his music," Bitton said. "I collected his records. And a lot of projects I ended up pursuing were thanks to that collection. I'm in so much shock, to tell you the truth."

"The most prolific thing to me about Prince was not only was he the most vibrant example of black genius that I have ever seen, but he was able to negotiate God and sex in his subject matter in a way that we had never seen before," Davis said.

"Every song was either a prayer or foreplay."

Prince became a Jehovah's Witness in 2001.

"He was a prophet. He was a pimp. He was purple. He was Midwest. He was magical. He was funny. He was so black. He walked through this world like he believed he was free, like a free artist, a free man," Davis said. "You know, he put slave on his face to challenge the entire music industry at a time when they were getting everybody's everything."

Prince would pop into shows all the time and invite the community, she said.

On Saturday, he played for a small gathering of fans at Paisley Park.

"Sometimes you could be at lunch with him, and he would get up and leave, because there was a melody so urgent, a music so real, that he would just go to the studio and put it down."