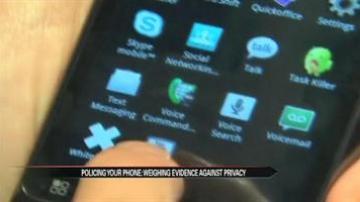 ST. JOSEPH COUNTY, Ind. -- Cell phones are treasure troves of personal information that could be valuable to police if you're arrested. The Supreme Court has taken up the issue of whether or not police officers have the authority to search through your phone if you're arrested.

"With the ability that I have with some of the forensic tools, not only is it a portal to a new world, it's a time machine," said Eric Tamashasky of the St. Joseph County Police Department.

When and how they do it is being reviewed by the United States Supreme Court.

Right now, the Supreme Court is deciding how much power to give police when it comes to searching your cell phone.

"They're afraid of the fishing expedition, and it's a deep ocean when you have an iPhone," said Tamashasky.

Two cases prompted the legal review. One of the cases concerns a man in Boston who was arrested for allegedly selling drugs. Police searched his phone without a warrant and used it to find evidence.

In St. Joseph County, police do not search your phone without a warrant signed by a judge.

That's something they say takes only minutes and ensures the evidence will be admissible in court.

"To have a local judge review what it is that local law enforcement does before we act, is easier now than it ever has been before," said Tamashasky.

A decision by the court won't impact how local police departments operate immediately.

The state's court of appeals would have to follow suit.

The Supreme Court is expected to reach a decision on this matter in late June. But even if they allow warrantless searches of cell phones, Indiana state law still provides protection.