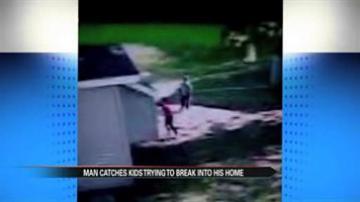 SOUTH BEND, Ind. -- South Bend Police are looking for at least five kids who tried to break into one man’s home. The surveillance video tells the story, which caught young kids desperately trying to break into a man’s home through a back window. Michael Clark said he was in his bedroom when he saw what was happening. Moments later you can see him walk outside and scare the kids away. “Six little kids that don’t have nothing to do in broad daylight decide hey let’s go jump on his roof. Well that’s not good enough, let’s go break in his house,” Clark said. Clark said he is lucky he was home; otherwise the kids could have gotten their hands on more than just his valuables. “They could have found my gun. Or they could have gotten in the liquor.” The attempted robbery now has Clark more concerned about the coming weeks when kids are out of school. “If there’s nothing for kids to do, they’re going to be in your house next,” Clark said. It is a concern shared by south bend police as well. “We see a lot of crimes of opportunity. We see larceny go up when it’s warm like this. We’ll see some burglaries spike because people who have a proclivity to do burglaries are just out walking around,” said South Bend Police Captain Phil Trent. Clark said a number of old tennis courts and swimming pools are now closed or torn down. Leaving several kids bored, spending hours on end with nothing positive to do. But Clark said this time these kids were lucky. He was able to scare them off before they got inside and before he felt threatened enough to grab his gun. But he said if they keep it up they might not be so lucky next time. “They are going to go into the wrong person’s house. And I was just lucky that I was able to look over and see the camera. But they might not be lucky when they go to somebody else’s house.” Clark told ABC57 he filed a police report Monday and South Bend Police said they will have additional patrols out as they work this investigation.