Suspect in custody after early morning shooting in South Bend 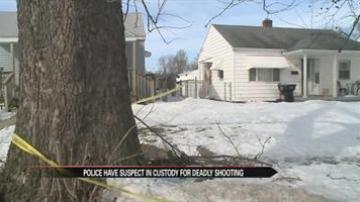 SOUTH BEND, Ind.-- One man is dead after a shooting inside a home on the 1800 block of Pulaski Street. Metro Homicide is investigating.

Around 1:30 a.m. on Sunday South Bend Police Officers responded to the home and found one man dead in the home.

Police said the man who was shot and killed was staying with the couple who lives there.

Several witnesses were taken to Metro Homicide to be questioned.

Police said they arrested 21-year-old Jacob Saye on a preliminary charge of murder.

Neighbors said the residents had a party that lasted into Sunday morning.

Vickie Mann said, “It’s real sad. It breaks my heart because I feel so sorry for their parents. And I feel sorry for the young kids too.”

Mann and her 5-year-old granddaughter saw the 20-year-old man being carried out of the home next door in a body bag.

Mann said, “My granddaughter was watching and she said, 'Grandma, did somebody die in there?' I said, 'Yes, that’s why you don’t play with guns.'”

Neighbors thought the residents were playing their drum set, but the loud noise they heard was actually a gunshot.

“I’ve just been sick ever since this happened.This is a nice neighborhood, I don’t understand,” Mann said.