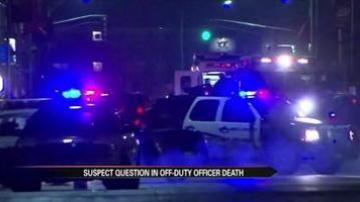 BELLWOOD, Ill. -- Police have a suspect in custody in connection to the death of an off duty sheriff's deputy.

Investigators say the 50-year-old Cook County Deputy died Friday night after he tried to stop two people as they robbed his daughter and her boyfriend outside a family holiday gathering.

He was shot in the chest as he was pulling out his own weapon.

No charges had been filed Sunday evening.