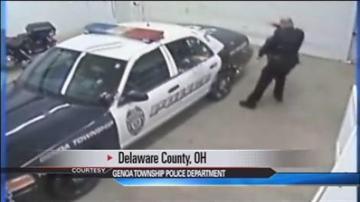 DELAWARE COUNTY, Ohio. --  A young Ohio woman appeared in court for breaking a window of a police car door and spraying officers with the glass.

The woman was in the back of the cruiser and as officers prepared to escort her inside she started violently kicking the window and ultimately kicked it in.

Officers say her behavior was fueled by too much alcohol.

None of the police officers were hurt.