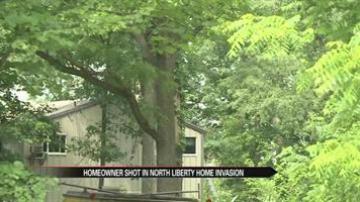 NORTH LIBERTY, Ind.-- A North Liberty resident was hospitalized after an intruder shot him in the face during a home invasion early Saturday morning.

The St. Joseph County Police department had K-9 officers search the rural area in the 29000 block of Quincy Road around 3 a.m. on Saturday for the suspect.

The 52-year-old victim told police the intruder was a young white male.

Lieutenant Matt Blank said, “He said that he was surprised by somebody in his bedroom in the middle of the night. A struggle ensued and somehow the shotgun became involved in the struggle and a couple of rounds were fired and he was struck in the face.”

Blank said the suspect somehow got a hold of the homeowner's gun and multiple pellets pierced his face.

“There’s not a whole lot of things going on in that area so if anybody did actually see any vehicles or hear anything as far as the gunshots themselves, our investigators would definitely like to talk with them," said Blank.

Neighbors said they are upset that crime is creeping into the North Liberty community.

Richard Dill said, “We used to take our own guns to school, we’d put them in the principal’s office, and when the time would come around one in the afternoon we all went hunting. We’ve never had any problems like this."

If you have any information about the home invasion call the St. Joseph County Police Department.

The victim is in serious but stable condition.