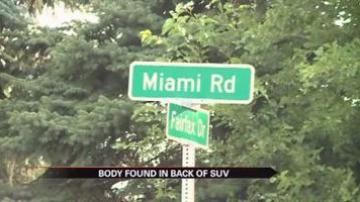 SOUTH BEND, Ind. -- Police are still trying to put together what happened when an SUV crashed into a flagpole on Saturday morning.

The crash happened on the 5200-block of S. Miami St. in South Bend.

A body was found in the trunk of the vehicle and police told us they thought it was suspicious.

Neighbors are confused as well, saying the damage to the vehicle was minimal.

When Stephen Kiai woke up Saturday morning, he was confused.

"I saw all the cars heading down this way on Fairfax, and I'm like why are all the cars turning this way?" Kiai said.

So Kiai went to the front of his house to see what was happening.

That's where he found a creme colored SUV wrecked into a flagpole.

Police said the driver reported being pushed off the road by another driver.

"The car did not look like it was that badly damaged. The one side - the light was gone. And I think the tire on that side was busted," Kiai said.

Despite the minimal damage, police found one person dead in the trunk.

"I was surprised to hear that somebody died in the car, because I've been trying to figure out how he died - unless he hit the pole and had a head injury," Kiai said.