Swimmer pulls up short in Cuba to Florida swim 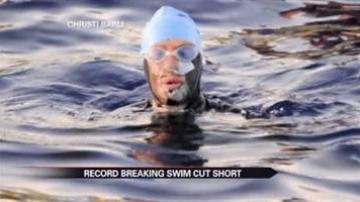 FLORIDA -- She battled storms and jellyfish but she came up short in her fourth attempt to swim from Cuba to Florida.

Diana Nyad ended her trip just one day shy of her 63 birthday.

She was trying to finish the 103 mile swim but a storm had set her back six hours.

The setback proved to be too much for her.

An official observer said Nyad had sunburn and suffered multiple hits from jelly fish. She has also had a strained bicep and could barely walk.

Her lips and tongue were also swollen because of the salt water.