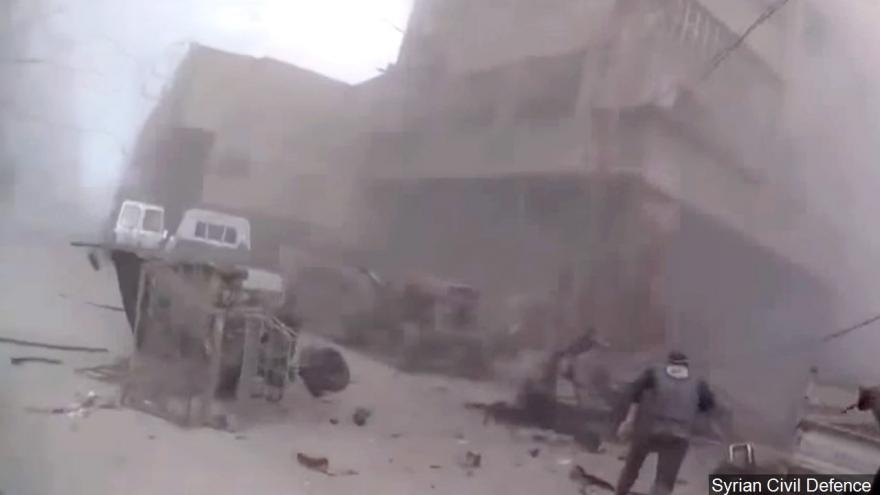 (CNN) -- About 500 people may have been affected by a suspected chemical attack on Syria's rebel-held town of Douma, according to the World Health Organization (WHO).

It remains difficult to place an exact figure on the number of people killed and wounded in Saturday's alleged attack on the outskirts of Damascus, which has pushed the US and its allies to the verge of military confrontation in Syria.

But in a statement on Wednesday, the WHO, citing reports from its health partners, said an estimated 500 patients seen at medical facilities exhibited symptoms consistent with exposure to toxic chemicals.

The WHO said more than 70 people sheltering in basements reportedly died in the attack, with 43 of those deaths related to exposure to toxic chemicals.

Two health facilities were also affected in the alleged attack, the statement added.

The WHO demanded "immediate unhindered access to the area" and said it was on standby to provide assistance to those affected, as soon as access was granted.

The statement comes one day after the US and Syria's key ally Russia blocked each other's proposals for an independent investigation during a heated UN Security Council meeting.

The Organisation for the Prohibition of Chemical Weapons is set to carry out a fact-finding mission of Douma, though it has so far declined to provide a timeline.

According to activist groups, helicopters dropped barrel bombs filled with toxic gas on the last rebel-held town in Eastern Ghouta, which has been besieged for six years and the focus of a renewed government offensive launched in mid-February.

Graphic footage shot by rescuers and activists show victims of the attack -- including children -- dead and injured, some ghostly white and foaming at the mouth in makeshift clinics. Others were found suffocated in their homes, according to first responders.

CNN has not been able to independently verify the authenticity of the images.

The attack has drawn condemnation from Western leaders, with US President Trump vowing on Monday to come to a decision "over the next 24 to 48 hours" on how to make Syria pay a "big price." And on Wednesday he warned Russia it should "get ready" for a missile strike on Syria, vowing to thwart any missile defenses.

Eastern Ghouta, one of the last major rebel-held areas in Syria, was once home to around 400,000 people. But in the past four weeks alone more than 133,000 people have fled the area, with tens of thousands more still trapped inside its largest town Douma, UN Refugee Agency spokesman Andrej Mahecic said in a statement Tuesday.